According to the Shiva Purana, Lord Vishnu wanted to have a very powerful weapon that would help him protect the world. For this, he thought of worshipping Lord Shiva with a thousand flowers.

Vishnu collected the required flowers and started the worship but eventually realized that he had fallen short of one flower. Not wanting to stop his prayer, and unhesitatingly, he plucked out and offered one of his eyes to Lord Shiva in place of the missing thousandth flower, a lotus. (This is the incident that led Vishnu to be also known as Padmaksha or ‘Lotus Eyed’).

Lord Shiva, overwhelmed by this extreme devotion, immediately agreed to grant Vishnu anything he wanted. Vishnu expressed his need of a weapon that could help him conquer the asuras. Shiva then agreed to give Vishnu the Sudarshan Chakra. A potent weapon that was created out of Shiva’s toe to slay the demon Jalandhara. A weapon comprising 10 million spikes in two rows moving in opposite directions, lending it a serrated edge. A weapon that is not thrown but through sheer willpower is directed at chasing down the enemy. A weapon that would help Vishnu conquer all enemies – no matter how many they are in number.

And so powerful is this weapon that it is also looked upon as a deity. In fact, sudarshana homa is a very popular homa performed in many Vishnu temples and Shiva temples in South India. 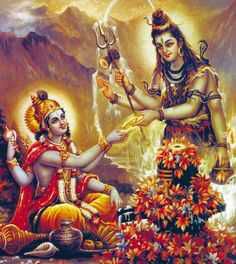 Email ThisBlogThis!Share to TwitterShare to FacebookShare to Pinterest
Labels: God