A great flood threatened a city in olden times. The waters were up to the palace doors. The king and the queen in the interest of the prince's safety put the baby in a basket to prevent it from drowning. Unfortunately, in the confusion that followed, they lost sight of the baby's basket.

The crown prince was separated from his parents. The basket with the baby prince went far with the flooding waters and finally ended up near the home of a poor family. They took care of the baby the best they could; no one knew that he was the crown prince. The prince was raised in poverty and as a beggar in the street. For a livelihood, the prince would spend most of the day begging; he too, did not know that he was really the crown prince. Thus, he would become happy if someone gave him something to eat or some money, and would be sad if he did not get any food or money from begging.
Now, the prince had a birthmark that the king and queen knew of. They searched high and low through the kingdom discreetly for a person with that birthmark. Luckily, after many years they finally found the prince, raised as a beggar. Suddenly the beggar's life changed. He was well cared for, educated, and raised to be the next king. He was very happy, as now he spent his time in luxury and learning from the best. A few years later, the king died and the prince was crowned king. He ruled his subjects well.

One day, the beggar prince who turned king, was thinking about his life; he reflected where his life had taken him. Suddenly, he felt like going back to the street and begging, just for the experience of it. So disguised as beggar, he went begging for a day. Just like before, some people gave him money or food, and some people did not.
However, this time he did not feel anything if he got anything or not from begging. Whether people gave him money or not, he continued to be at peace, because inside the disguise he knew he was the king.

*Moral:* This story teaches us about who we really are. Each of us is a child of God; God’s Blissful soul is in each of us. However, we do not realize it and do not feel Bliss. When something bad happens to us, we feel bad; when something good happens to us, we feel happy. In life, something good or bad will always happen to us.
However, if we want to be Blissful all the time, we have to do spiritual practice, that is, realize that we are God’s children with His Blissful soul in us. Then, we will live like the beggar king in this story. 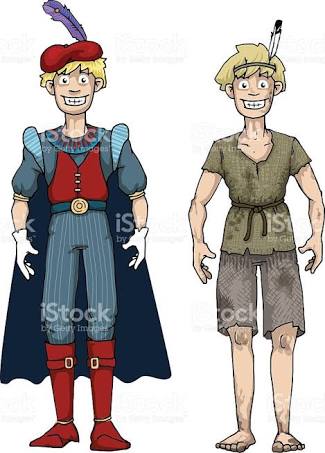