"What is Meditation" - by Sri Ramana Maharshi

*What is Meditation?*
_*as explained by Sri Ramana Maharishi_*

*This was a question haunting a small boy. Their parents were at wit's end, as they could not explain it in a simple language the boy could comprehend.*

*Sri Ramana laughed to himself. Then with smiling face, he asked his devotee to serve the boy dosa from the kitchen.*

*So, on a plantain leaf, a dosa was served. Sri Ramana looked at the boy and said,*
*”Now I will say "hmm" *
*Then only you should start eating.*
*Then again I will say "hmm" After that no piece of dosa should be left on your plate."*
*The boy agreed. He was so excited. Others were watching expectantly.*

*Now the boy was eagerly waiting for the signal by looking at Sri Ramana's face. When he gave the signal "hmm" the boy started eating. Now his attention was on Sri Ramana. He wanted to finish dosa before the next signal. The boy was eating dosa in a hurry, tearing big chunks of dosa,  but, all the time keeping his attention on Sri Ramana. The dosa was reducing in size gradually. There was a small piece left. The boy was looking anxiously  at Sri Ramana for the second signal. The moment he gave the  signal, the boy immediately put the dosa in his mouth.*

*Now Sri Ramana asked him "where was your attention till now? On me or on Dosa?"*

*Shri Ramana said "Yes. You were actively involved in finishing dosa, with your attention on me. You were not distracted at all.*

*Like this when you do your daily activities with your attention or thoughts on God in the background, it is known as meditation."*

*The two signals "hmm" are birth & death. Within these two events, one can engage in meditation, as demonstrated by Sri Ramana Maharishi. But to understand this we all need Divine Grace to mellow & mature. We all differ from each other and hence take different time to comprehend this great truth.*

*May God bless us with His Divine Grace, Love and Blessings! 🙏🏼😊* 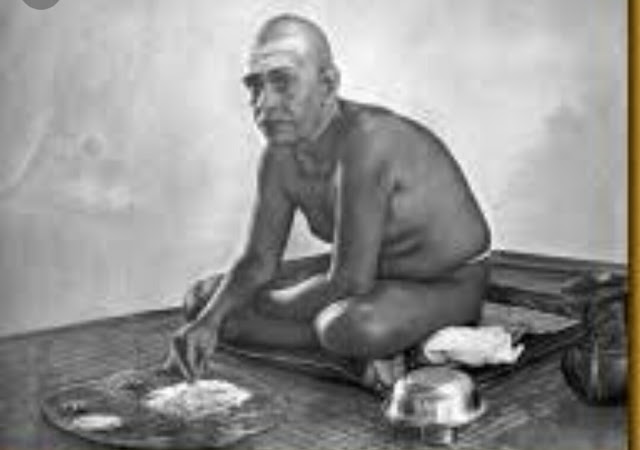