Once there was a king who distributed food to the brahmanas.
One day, as he was giving out food to the priests, an eagle flew above holding a dead snake in his claws.
Out of the mouth of the dead snake fell a drop of poison into the food that the king was distributing.
No one knew or saw that this had happened, so the king continued distributing the food.
The Brahmin who accidentally got the poisoned food from king died, and the king was feeling very sad about it.

Chitragupta, one of the assistants of Yamaraj (the god of death) who had the job of assigning retribution for karmas to the living beings had a problem.
When this incident with the king and the poisoned food happened, he did not know who to give the karma to.After all, it was not the eagle's fault that it had carried the dead snake in its claws (since this was its food), nor was it the dead's snake fault, nor was it the king's fault because he did not know that the poison fell into the food.
So Chitragupta went to Yamaraj for a solution. Yamaraj told him to wait patiently. Soon a solution would present itself, the lord of death assured him.

One day, few other brahmanas entered the kingdom in order to meet the king.A woman was sitting next to the road, selling wares and they asked her: "Do you know where the king's palace is and how we can get there?"She said: "Yes," and pointed at the right direction. "But, be very careful," she said, "the king is known to kill brahmanas!"
The moment she said that and criticized the king unrightfully, Chitragupta got his answer.He decided to give HER the karma for the death of the brahmana! 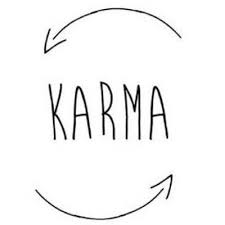 As you Sow, so shall you Reap

A  small  story which beautifully illustrates that what you sow, you reap.

"Sir,  I  am  a  very  poor  villager,
I  don't  have  enough  money to
even  buy the required weights for  weighing  the butter, I usually put the  1Kg  sugar  you give me on one side of  Weighing scale and weigh butter on  another side"