The Story of Sena Nayi (Sena the Barber)

The Story of Sena Nayi (Sena the Barber)

Sena Nayi was a barber by profession who lived near Pandharapur. Sena, a very pious and God loving person, used to get up early in the morning and after his bath, perform his prayers to God Vittala before commencing his daily chores and work.  Sena was also the King’s barber and would have to go to the palace whenever the King required his services and called him.

Sena’s neighbor who was also a barber on seeing his wife lying, quietly went and informed the King, that Sena was very much at home while offering himself to do the job as his replacement.

The King, on learning this, got furious and sent his guards to arrest Sena. To protect his ardent devotee, God Vittala instantly appeared in the form of Sena in front of the King. The moment the King saw Him, his anger dissipated. He got attracted to His magnetic personality and without batting his eyelids he was watching the beautiful form of Sena smiling cheerfully and with the shaving kit.

When Sena touched the King to shave him, the King felt something unique, a sudden sense of serenity spread within his body from the soothing touch. He watched Sena without uttering any words as the charm attracted him so much and he felt Sena’s glance very divine. Sena went on with his job and washed the King’s head.  The King felt heavenly and the divine fragrance mystically drifted the king’s thoughts took the King to top of the world.

The King felt very happy and complimented him that he was the best barber in town. Sena then started applying the fragrant oil to the body of the King.  As Sena scooped the oil from a bowl, the King could see the reflection of God Vittala in the oil. He was amazed on seeing this and was unable to understand this strange yet divine phenomenon/ experience. That cheerful divine smile made him ecstatic, yearning to see more of his form.  He was engrossed in the divine silhouette of the God Vittala that he saw in the bowl and went into a trance.

Finally, the spell was broken as Sena completed his job. The King was so pleased with him that he gave him a bagful of gold coins. God took the bag of gold coins and placed it in Sena’s house and disappeared.

The King was in a state of bliss all day and in the evening commanded his servants to get Sena yet again. The Royal guards immediately went to Sena’s house and asked him to accompany them to the palace immediately.

Fearing King’s wrath, Sena was too scared to see the King for his act of not reporting to the King when summoned in the morning.  Taking his kit, Sena went to the palace with the guards. On seeing Sena entering the palace the King got up and greeted him. Sena was all confused as he was expecting a severe reprimand. Instead the King asked him to reveal that divine form he exhibited in the morning while shaving.

Sena was perplexed as he didn’t go the palace that morning. He fervently prayed to God Vittala for His guidance. The King ordered his servants to bring the bowl of oil and saw Sena’s reflection in it, but was disappointed that he could not see the form he had seen in the morning.

Sena immediately understood what had transpired that morning. His eyes were filled with tears and sobbing uncontrollably, he told the King that it was God Vittala who had graced him. He was sad that the God had to take his role to save him from the King’s punishment.

The King hastened to console Sena and thanked him for his devotion. He told him that he was fortunate to have had the Darshan of the God only due to Sena’s Bhakti. Sena prayed to the God to show his divine form to the King in the bowl of Oil once again and the God willingly obliged.  The King became an ardent devotee of God Vittala from that day.

Later, Sena saw the gold coins that Vittala had left at his home and distributed them to the poor.  Sena took leave from the King’s duties and decided to serve the God permanently at Pandharapur.

All glories to God Vittala! 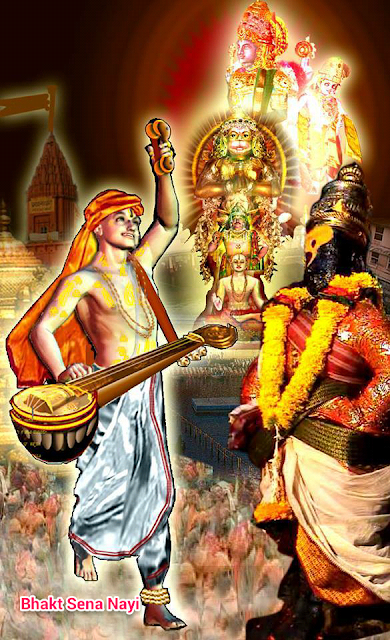