Nirjala Ekadasi is one of the most popular and toughest Ekadashi Fasting days. In 2016, the date of Nirjala Ekadashi date is Thursday, June 16, 2016. Nirjala Ekadashi is also known as Pandav Bhim Ekadasi fast. The difference from other Ekadasis and Nirjala is that devotees do not drink water on the day. Ekadasi fasting is dedicated to Lord Vishnu and is observed on the 11th day of a fortnight in a traditional Hindu calendar.

 Legend has it that Bhima, the second of Pandava brothers, wanted to observe Ekadasi fasting but still eat food. But fasting and eating was not possible. So Sage Vyasa advised Bhim to observe Nirjala Ekadasi fasting which falls during the waxing phase (Shukla Paksha) in Jyeshta month as it has the benefits of observing all the 24 Ekadasis. Thus Bhim was able to get the benefits of all Ekadasis by observing Nirjala Ekadasi.

Nirjala Ekadasi is one of the strictest fast in Hindu religion and among all Ekadasis.

Nirjala means ‘without water.’ Staunch Vishnu devotees who undertake this fast does not drink water while fasting on the day. No food is also consumed on the day. The fast begins on Ekadasi sunrise and ends on next day (Dwadasi) sunrise. 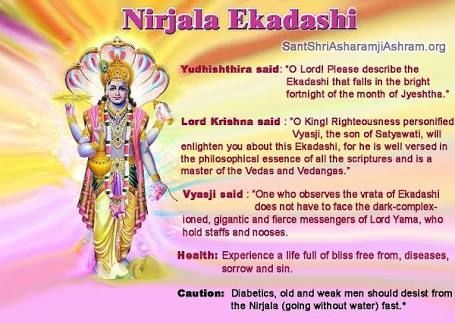